The more I continue to follow-up on the progress of the Fat Man Walking, the more I wish someone would do something help him understand how to modify his diet as he continues his walk! With his continued poor diet, he may be doing himself more harm than good in the long-term.

He started his journey to walk across the United States back in April, in an effort to lose weight.

I am not happy because I am fat and being fat makes every day unhappy. I did not make this website to complain about it however, instead I am doing something about it and this site was made to chronicle my story. I am going to walk across the United states from San Diego to NYC to lose weight and regain my life!

Over the last seven months, Steve Vaught has walked 1338-miles from San Diego, CA to Edmond, OK and has another 1478-miles to go before reaching New York, NY. 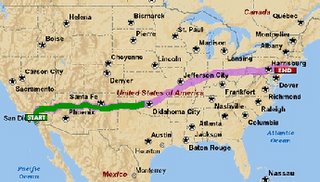 How much weight has he lost?

While I am thrilled to see his perseverance, I am totally unimpressed with how he continues to eat - in fact, I worry, as I said before, that he may be doing more harm than good. He readily admits he now understands he is "addicted" to sugar, yet continues to consume sugary foods and beverages, while continuing on a physically demanding walk across the country.

For all of the efforts over the past seven months I still routinely blow it by giving in to my weaknesses. If I can force myself to do this walk then why can’t I force myself to be more responsible with my food choices?

He is unimpressed with how much weight he's lost, he thought by this time he would have lost more.

He should have and could have - if he'd modified his diet appropriately for the physical demands of this walk.

I'm not including the following comparison to dog him, but to show that his weight loss is not working the way it should... 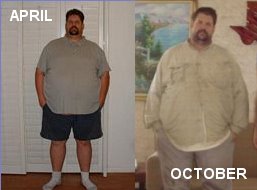 Has anyone sat down with him and really told him how critical it is to provide his body with the "raw materials" it requires to "build and repair" his cells & tissue - especially his muscle - while he is doing this? You know, the protein and fat? He doesn't need the added sugars or the junk foods on this walk - he needs real food, rich with amino acids and fatty acids; foods that are nutrient-dense and optimize health - otherwise he's robbing his body in the long-term, especially with the demands of this walk!

Seventy-three pounds may sound impressive - but when one looks at the time and effort to realize the result, it is clear something is wrong with this picture. He's almost at the half-way mark of his journey - there is still time for him to do this in a way that is going to allow him to lose weight while not causing long-term damage to his body - isn't his goal to get himself healthy for the long-term?
Posted by . at 9:47 AM