The women following the low-fat diet in the Women's Health Initiative Dietary Modification Trial "did not show any signs of diabetes, their triglycerides were normal, and their blood glucose was normal," said Dr. Elizabeth G. Nabel, director of the National Heart, Lung and Blood Institute, which sponsored the $415-million study.

Just how accurate is that statement?

To provide an answer, we have to first understand the risk markers used by clinicians for diabetes and whether the data from the study can be useful to determine if the women following the low-fat diet were not showing "any" signs of diabetes.

There are a few of these markers, most from blood tests that were conducted on the women in the study.

The first is, of course, blood glucose levels. And, if we use just this value, the women in both sides of the trial - the low-fat group and the control group - both appear to have normal glucose levels that wouldn't set off any alarm bells. That is, until you look past the "mean" and review the actual range of values. The mean at baseline was 100.4 in the low-fat group and that dipped to 98.8 after three-years. But, the range at baseline was 78.3-127, which means some women already had signs of diabetes based on their blood glucose level.

But, this alone is not a good measure - we need to look at something else - insulin levels. And this is where we see some trend toward the development of diabetes for those following the low-fat diet. At baseline, the group had a mean insulin level of 9.9 and this rose to a mean of 10.5 by the 3-year follow-up. More disturbing is the increase seen in the range of insulin for the group - at baseline this range was 5-14.8 and it rose to 5.2-15.8 for the group.

Now, to be fair, 15.8 is still within the normal range, with the upper limit accepted as 20 for normal. But, increasing insulin levels are often a sign the body is producing more insulin because insulin resistance is under way. It is for this reason physicians often use what is called a HOMA-IR value to understand the glucose-to-insulin ratio better.

HOMA-IR is the Homeostasis model assessment for Insulin Resistance. A value greater than 3.8 is indicative of insulin resistance. It is calculated by using the formula:

And, the HOMA-IR of participants in the low-fat group shows these women were experiencing an increase in their insulin resistance. At baseline the mean was 2.4 with a range of 1-3.8, but at the three-year mark that range had increase to 1-4, which means some women were now insulin resistant and at a high risk for diabetes.

Last year, the journal Diabetes published Insulin Resistant Individuals - Using Clinical Measurements to provide clinicians with a comprehensive set of tools to assess a patient and insulin resistance and their risk for diabetes. The article is very detailed but also pretty easy to understand for a layperson too!

Within the paper is a very nice, easy to use "tree" that provides a clear picture, based on various measures, of how many people within a given population will be diabetic. Here is the one that stands out in my mind: 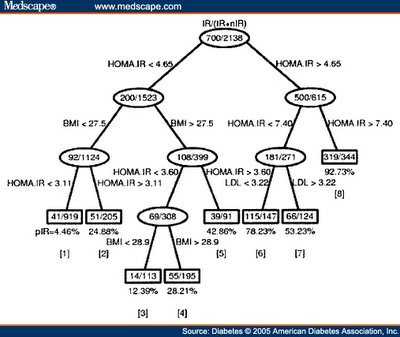 This particular tree uses HOMA-IR and BMI as the predictor for diabetes. If we follow the tree, and use the BMI of these women, we find that this tree predicts that 42.86% of the women are insulin resistant. In the discussion section of the paper, we find "These decision rules are based on routine clinical measurements and appear to have acceptable sensitivity and specificity." And, "The most accurate decision rule is based on HOMA-IR (which requires a measurement of fasting insulin concentration) and BMI."

The paper concludes simply with, "In conclusion, we have shown that it is possible to identify individuals who are insulin resistant using routine clinical measures, thereby improving the likelihood that recognition of this important harbinger of serious diseases (i.e., diabetes and cardiovascular disease) will be incorporated into clinical trials and ordinary clinical practice."

Harbinger of serious diseases. I'm still letting that sink in myself and can't quite reconcile Dr. Elizabeth Nabel's statement with the facts above. Can you?
Posted by . at 8:56 AM