This morning a press release from Marriott caught my attention, Kids Eat Free - Three Meals a Day - At Marriott Hotels, as it reminded me that the topic of the "kid's menu" is one I've kept putting off writing about since there are so many other things to write about that always seem more pressing.

Since my son was born, my husband and I have almost always taken him out to eat with us. It's very rare he doesn't accompany us.

I can still recall one of our first dinners out when he was finally predictably and regularly eating solid food, he was 10 or 11-months old - we ate at Lebanese Taverna in Arlington, VA.

Seated at the next table was another couple with their little girl, who was probably 2, and a delight - well behaved, laughing happily as her parents engaged her and enjoyed their dinner. What struck me as somehow sad was her meal - deep-fried, breaded chicken fingers with french fries.

Here her parents had an incredible opportunity to provide a wonderful and delicious new taste experience for her, and they instead chose to order the same-old, same-old, available on every kid's menu in America - chicken nuggets and french fries.

That night, my son dined on tastes of everything we were eating - Hummus bel Shawarma, Mixed Shawarma and Sharhat Ghanam. Portion sizes being what they are these days, it was more than enough for the three of us, with leftovers taken home in a doggie-bag!

In almost every restaurant we're eaten in, it's the same story - the kid's menu is often a repeat from the last restaurant - chicken nuggets, noodles with butter (and sometimes even cheese), pizza or bugers (with and without cheese) - with a side of french fries or other potato concoction (think tater tots), a beverage and often a dessert too; all for a rock-bottom price that's hard to pass up!

Is it any wonder our children's most often eaten foods are fries, pizza, burgers, pasta and chicken nuggets? It's all we offer them each and every time we order off the kid's menu!

On our recent vacation in Colorado, we had lunch at Alpenglow Stube (young children are discouraged from the dinner hour). This gave us an opportunity to bring him up to the summit on a gondola, and as luck would have it, a snow cat ride down the mountain after lunch since the winds picked up and the gondola was closed due to high winds.

Lunch is a pre-fixe menu that included a starter buffet wtih a sampling of cheese, crackers, breads and spreads from around the world, followed by a choice of homemade soup, then a second buffet of salads, fruits, and other selections before the entree was finally served. On the day we were there our soup selections were either coconut-chicken-curry or wild boar sausage in a tomato and vegetable base; our entree selections were rack of lamb or a surf-and-turf combo of grilled venison and shrimp.

Some pretty daring stuff to consider for a toddler!

As we read the menu and options, we were told our son might prefer noodles with butter, an item not listed on the menu; then it was added, we could also choose off the menu if we preferred, assured that portion sizes were small anyway.

No decision really - our son hasn't had a meal off a kid's menu in a restaurant - so it was the wild boar soup for him and me (coconut-chicken-curry for my husband) and grilled venison and shrimp for him; rack of lamb for both my husband and me.

A quick trip to the cheese buffet started our delicious lunch with feta, goat, blue, cheddar and brie, a small assortment of crackers and some unidentified (but interesting looking) spreads. The only cheese not eaten by my son - the blue, which was quite tangy, with quite a "bite" to it; understandable that a two-year-old might not find it palatable! 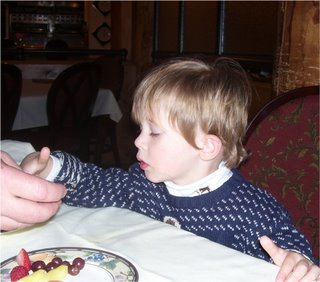 Our soup, a small and reasonable portion, followed. It too was delicious, only the broth a touch too spicy for our son - so he picked out the vegetables and sausage to eat, leaving the broth behind. This was followed by another quick trip up to graze the salads - some tomatoes-basil-mozzerella, olives, sliced melons, grapes, strawberries and pineapple proved to be winners.

The entrees followed, beautifully presented, equally delicious - and as stated, portions served as portions should be - just enough to enjoy without the need for a wheelbarrow to carry out the leftovers! Dessert, nah! - we were quite content after this feast, nibbling on the last bits of fruit and cheese, and passed on the delicious sounding desserts offered; awaiting our small doggie-bag (a leak-proof box actually) to arrive with our bill.

My reason for these details?

No other child in the restaurant that afternoon was eating anything other than the bowl of noodles and cheese, a bowl that contained no less than six cups of pasta, I'm telling you, it was HUGE, glimmering with butter and parmesan cheese. Every child under five, it seemed, was left to mull over this super-size bowl of noodles while their parents enjoyed the incredible meal.

Surely with the cheeses, fruits, salads, speads and entrees (that included a wonderful assortment of baby vegetables as the side) these kids would find something they liked and would eat, no? In this restaurant, it wasn't a matter of enticing rock-bottom price - whether we chose the noodles or the complete menu, the price was the same. So, why would anyone not choose the full-menu and encourage their children to at least try this wide assortment of well-prepared, fresh, delicious food?

Somehow I think we've come to believe our children will not eat such food; they're picky eaters and prefer the known over the unknown. In some ways this is true; moreso if you do not encourage a wide variety of flavors, tastes and textures early on. The "kid's menu", I believe, reinforces the notion that children will only eat a very limited selection of foods.

Can you imagine, that no matter where you go to eat out - italian, chinese, mexican, indian, american, steakhouse, seafood, thai, french, lebanese, middle eastern, or other yummy sounding restaurant - you're given just four choices, actually the same four choices, every time you eat out? Chicken nuggets, burgers, noodles, pizza - again and again, everywhere you go, every restaurant you're taken to eat.

Is it any wonder our children's most often eaten foods are fries, pizza, burgers, pasta and chicken nuggets?

We're teaching them that's what you eat, what they're to eat, every time we eat out and once again order something for them from the "kid's menu."

Personally, I don't see us ever ordering off the kid's menu - thus far, this decision has served us well; our son enjoys eating out, is continuously trying new foods, and we've yet to not find something on the menu we're going to order that isn't something he'll eat too. Over the holidays, we dined at a local steakhouse with visiting family - an extra side of aspargus (cooked tender) was added to our order simply because it's one of our son's favorites and didn't come with any of the entrees. His plate was filled with a selection of our meal, along with his asparagus and some of our vegetables.

The kid's menu at that restaurant? Burgers, chicken nuggets or pizza. No bowl of noodles, but I bet if we'd asked, they would have made them!

Childhood obesity is on the rise and I have to wonder if, with all the meals eaten away from home these days, if part of the problem isn't so much the eating out part, but the never-changing, always the same meals - the same junk food everywhere and anywhere you eat out - encouraged by almost every restaurant in America, found again and again the kid's menu?

While these items may appeal to the budget, what are they really teaching our children about eating?
Posted by . at 11:58 AM